Country Shul to close its doors after 25 years 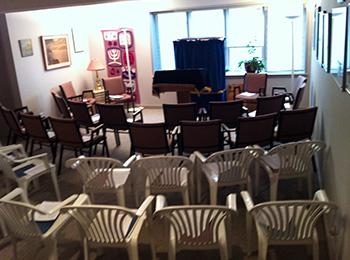 For hundreds of Jewish cottagers in the Muskoka area, this summer marks something of an end of an era.

The Orillia Country Shul, which has run for 25 years out of the private, Orillia-area cottage of Toronto businessman and philanthropist Leslie Dan, will close its doors at the end of August.

“There’s a beginning and an end to things,” Dan, 85, said pragmatically. “My wife and I would like to travel a bit in July and August.”

Indeed, Dan and his wife, Anna, spent every weekend during July and August running the synagogue Dan founded with his first wife, who died 20 years ago.

They did so to fill what they felt was a need for the many Toronto-based Jews who weekend in cottage country but don’t necessarily want to forgo Shabbat services.

“It’s a bit like a shtibl,” Dan said jokingly, explaining that services operate out of a room in the cottage’s basement and are usually attended by 40 to 50 people each week who come to daven from cottages scattered about the Muskoka and Barrie area.

“Many of us regularly go to Shabbat services during the fall and winter season, so we like to continue going to shul… And many had to say Kaddish and were appreciative of having a Shabbat service nearby,” said Dan, a Hungarian-born Holocaust survivor who arrived alone in Canada at age 18.

He described the shul as “ecumenical,” noting it had no permanent rabbi but different Toronto rabbis and one or two from Israel, from several denominations, as well as lay leaders, were invited to lead services each week.

Though always somewhat abridged, services were led according to the presiding rabbi’s denomination and style, and included a Torah and a Haftorah reading. Each summer, Dan borrowed a Torah from Toronto’s Temple Emanu-El, where he’s a member.

If the rabbi leading the service was Orthodox, men and women would sit on opposite sides of the room, otherwise, they’d sit together.

“We attracted a large group of rabbis who very willingly conducted the services, and some, [especially if they were shomer Shabbat] would stay over at our cottage for the entire weekend… They really enjoyed spending Shabbat here. It’s always nice to be in the country in the middle of summer,” Dan said.

Services were followed by a kiddush luncheon, all of it fully provided by the Dans and largely prepared by Anna, and the couple never asked members to pay dues of any kind.

“We’ve never had any trouble getting a minyan,” Dan said, noting that the total 400 or so regulars who attended periodically each summer – from young people to retirees – had all learned of the shul through word of mouth, and that many arrived with friends in tow.

Lionel Sharpe, a Torontonian in his mid-70s, has been attending the Orillia Country Shul for about 15 years, and has typically led services once per season.

Sharpe first heard about the shul through friends, and he and his wife quickly grew accustomed to making the 40-minute drive from their Gravenhurst cottage to Orillia each Shabbat morning.

“It was a nice way to get together with people… I liked that there were different rabbis and speakers each week… the chance to hear different people expressing their particular way of Judaism,” he said.

He said the shul was relaxed – people often came in shorts – and Dan greeted everyone at the door, creating a genuinely welcoming feeling.

“It was like a gift being handed to you, and all you had to do was show up and appreciate it,” he mused. “Some people go golfing, some people go for beers, some people go to shul… We’ll miss it, it became part of our summer.”

Asked if he’s going to miss running the shul, Dan remarked, “I will miss it, but life must go on. I’m not getting any younger, and 25 years is a long time.”

Office hours by appointment only during Covid stay at home order Closed all Jewish and Statutory holidays We check voicemail and email daily
Am Shalom Congregation
767 Huronia Road, Barrie, ON L4N 9H2
P: 705.792.3949